President Trump has been widely criticized by politicians of both parties for his failure to speak out forcefully about the racist demonstration in Charlottesville, Virginia that became deadly when a white man with a picture of Hitler on his Facebook page intentionally rammed the crowd protesting the demonstration, killing one person and injuring more.

Business leaders have been more effective at communicating their unequivocal opposition to the display, with marchers carrying Nazi and Confederate flags.  Airbnb not only canceled reservations made by people who were coming to Charlottesville to attend the event; it cancelled their accounts.   GoDaddy will be taking down the neo-Nazi website and Google has said they will remove it from their search engine.  Even the maker of the tiki torches carried at the event has expressed regret that they were used. The CEO of Merck, Kenneth Frazier, Intel CEO Brian Krzanich, and the CEO of Under Armor, Kevin Plank,  have resigned from President Trump’s Advisory Council in protest over his failure to respond appropriately to the demonstration. 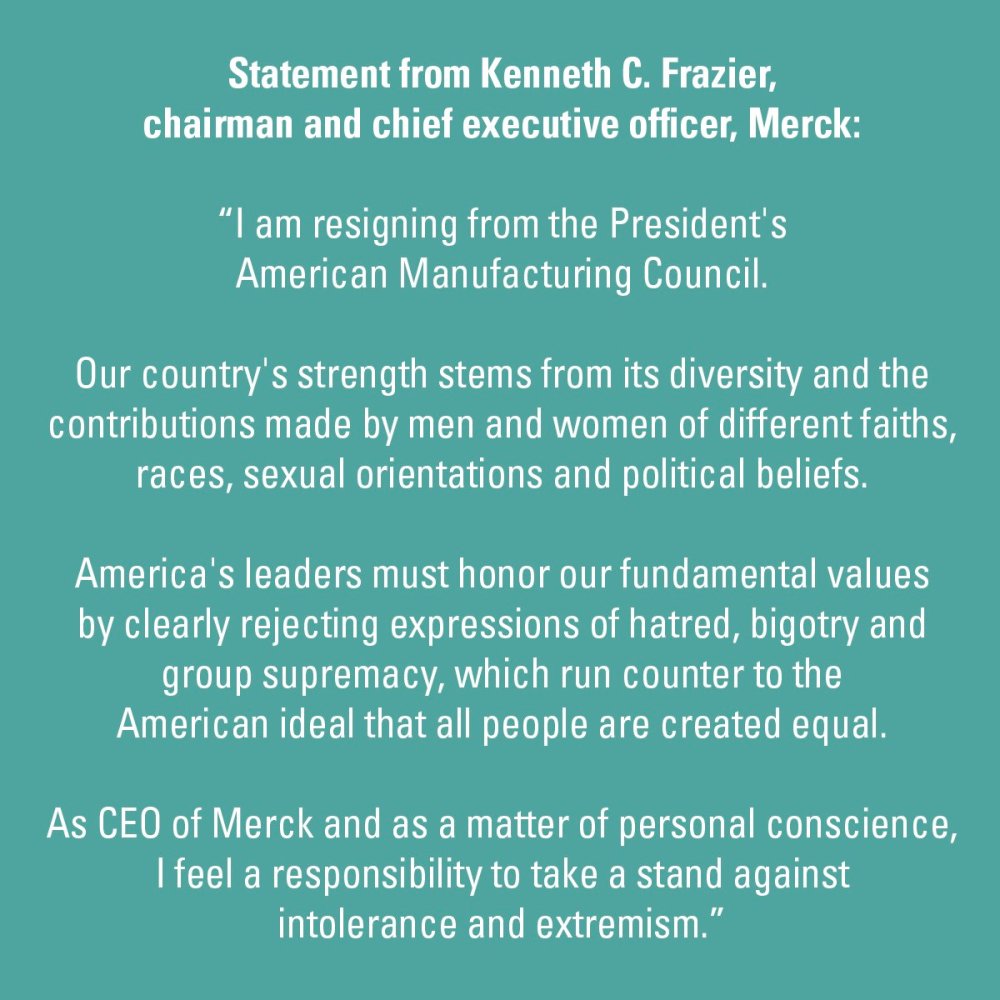 The New York Times asks, What About Other Executives? So do we. At Slate, Daniel Gross writes:

[S]even months into the Trump administration, we’re seeing that showing up and uttering pro forma support may not be a viable PR, business, or personal strategy for CEOs who want to lead their companies while being true to themselves.

Some CEOs have discovered that mouthing even anodyne support for Trump can have a really negative impact on their business relationships and stock price. In February, Kevin Plank, the CEO of apparel-maker Under Amour and a member of the manufacturing council, said “to have such a pro-business president is something that is a real asset to this country.” In response, some of the company’s leading endorsers, including Stephen Curry, expressed their anger, customers rebelled, and the stock was ultimately downgraded.

Other CEOs have discovered that while the policies of Trump and the GOP may be theoretically good for “business,” they are really bad for their particular business. Duh. Musk was the first to bail from Trump’s manufacturing council after Trump announced the U.S. would pull out of the Paris Agreement on climate change.

Meanwhile, companies are coming to two collective realizations. First, while the Trump administration is delivering favorable policy to energy companies, Wall Street, and for-profit colleges, the prospects for broad-based tax reform (or even tax cuts) aren’t particularly good. Second, given Trump’s unpopularity, his power to inflame the public against any single company has diminished.