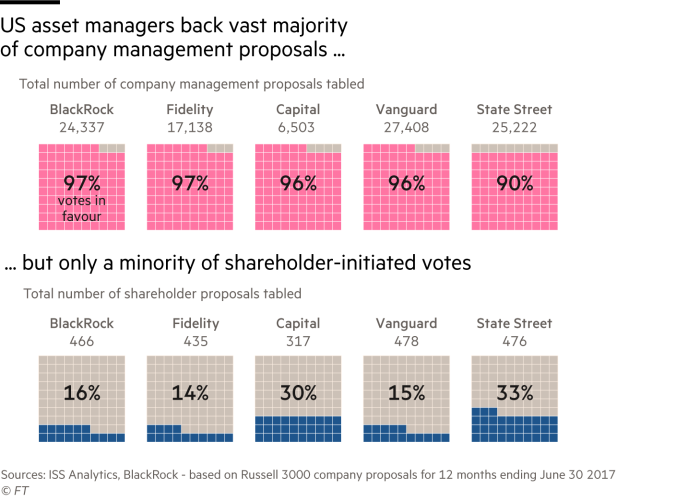 About a fifth of the freely traded shares of the US equity market are now owned by index-tracking funds and passive institutional mandates, according to S&P Dow Jones Indices. This underlines the vital role played by the three largest managers in this space — BlackRock, Vanguard and State Street — in policing corporate standards.

Larry Fink, chief executive of BlackRock, recognized this role when he called for “a new model of shareholder engagement” in his annual letter sent to fellow chief executives in January. “Our responsibility to engage and vote is more important than ever,” said Mr Fink, who urged chief executives to redouble their efforts.

BlackRock, Vanguard and State Street have historically supported management-backed proposals in about 90 per cent of US company votes, the vast majority of which are routine or uncontroversial.

In contrast, the big three gave support to only a small minority of the more potentially contentious proposals tabled by shareholders — though the number of dissenting votes by passive fund managers has been rising modestly. Passive managers insist these public voting records fail to recognize their successes in influencing companies via private meetings. Measuring the effectiveness of this so-called “quiet diplomacy” is virtually impossible, particularly as many managers are reluctant to disclose exactly how they have exercised their influence. They prefer instead to report anonymized examples in annual stewardship reports. This has led a number of academics to question the stewardship claims made by passive managers.