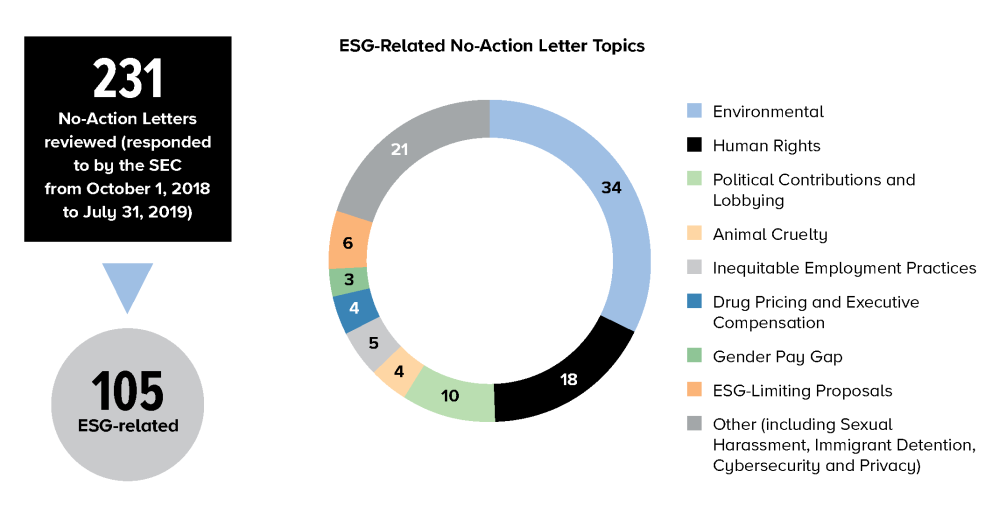 Shareholder proposals relating to ESG matters are frequent targets for exclusion by companies, and based upon a survey of the no-action letters submitted during the 2019 proxy season, this trend continues. Over 40% of the no-action letters we reviewed for the 2019 proxy season related to a variety of ESG matters, and the arguments and outcomes in those letters are instructive as to how companies and the SEC staff are approaching ESG proposals, especially in the wake of recent SEC staff guidance on its approach to requests based on the “economic relevance” (Rule 14a-8(i)(5)) and “ordinary business” (Rule 14a-8(i)(7)) exemptions, which are frequently cited grounds for excluding ESG-related shareholder proposals. [1] In terms of the subject matter of proposals for which exclusion was sought, the largest group related to environmental matters, sustainability and climate change, accounting for 34 out of the 105 ESG-related no-action letters we reviewed. Human rights issues also continued to appear as the subject of numerous proposals for which no-action letters were submitted, accounting for 18 no-action letters. Other shareholder proposal topics giving rise to no-action letters included topics such as political contributions and lobbying (ten), animal cruelty (five), drug pricing (four) and proposals relating to inequitable employment practices and the gender pay gap (eight). Other proposal topics that spawned no-action letters included “me too,” hate speech, immigrant detainees, diversity and privacy.